The Bizim Kiez campaign, which has won over many people in the neighbourhood as well as plenty more outside of it, always represented more than just the battle to save one grocery store. It became a symbol to continue our fight against gentrification; against investors and banks pushing us out of the place where we have made our lives.

While the Bizim Bakkal store has been saved, there are many others who face the risk of being forced out as a result of rapid gentrification. Those in social housing face the risk of eviction, particularly as there are indications that the city may sell some of these buildings to investors.

This has happened at 142 Skalitzer Strasse, resulting in monthly increases of up to €400 and placing many tenants at risk.

The Bizim Kiez campaign showed us all that we have power in numbers and that when we unite we can have our voices heard. We have built these communities and we are the ones who enrich them; we will not be forced out by speculators and investors who have little desire for anything other than profit.

We will continue to meet and show our strength – to show that we are united to help those in need in our neighbourhood.

Come on Wednesday 15 July at 18 to 142 Skalitzer Strasse, where we will participate in a demonstration before moving to Wrangelkiez at 19.

Bring your pots and pans, bring your whistles and your voices. We will make ourselves heard!

We will discuss everything about the current situation, other acute cases of displacement and hear a free solo concert from Tobias Christl. 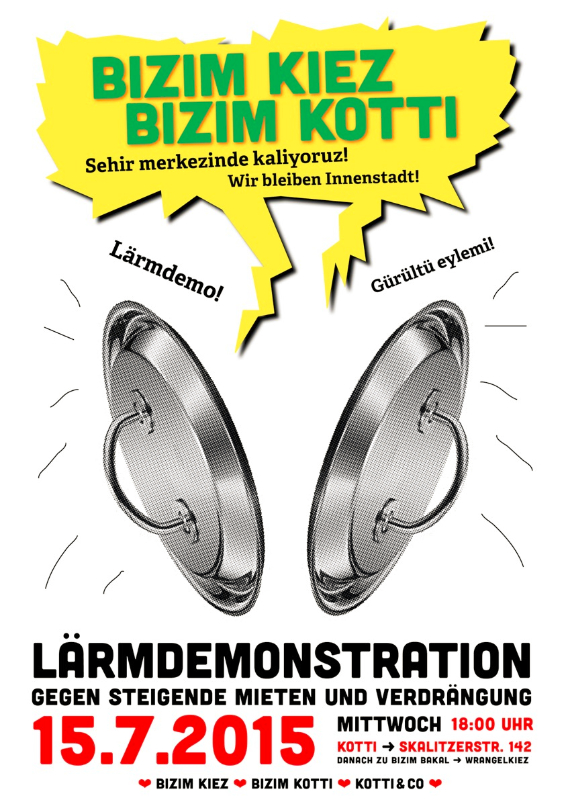