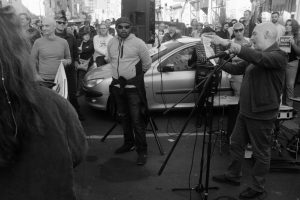 My name’s Giles, I’m English and have lived in Berlin for 26 years, 16 of them here, next door to the Markthalle 9. I live from teaching, translating and conducting art & music projects with the local community and, when that isn’t happening, from Harz IV.

When I read of the new owners’ plans for the declining Markthalle, I was relieved that it hadn’t been bought by a large supermarket chain like the one in Ackerstrasse in Mitte and moved by their plans to create a “market hall for all” based on locally-sourced organic products. I’ve been engaged in environmental activism and “Small is Beautiful” organic food production since my teens in the 1970s, so to me this seemed like an exciting and visionary project, and perfect for Kreuzberg which has been shaped by similar activists since the ‘70s.

Pragmatically, however, I can’t afford to live from purely organic produce so I’ve always done most of my shopping in Aldi and similar discounters, pleased that even they have responded to market pressure and have started selling affordable bio products. However, the local community in the Markthalle has been gradually replaced by daytrippers with a higher spending power until now Aldi is the only place I’ll meet, say, the Turkish mother from my daughter’s Kita or my 85 year old neighbor who sits on a bench inside after shopping. 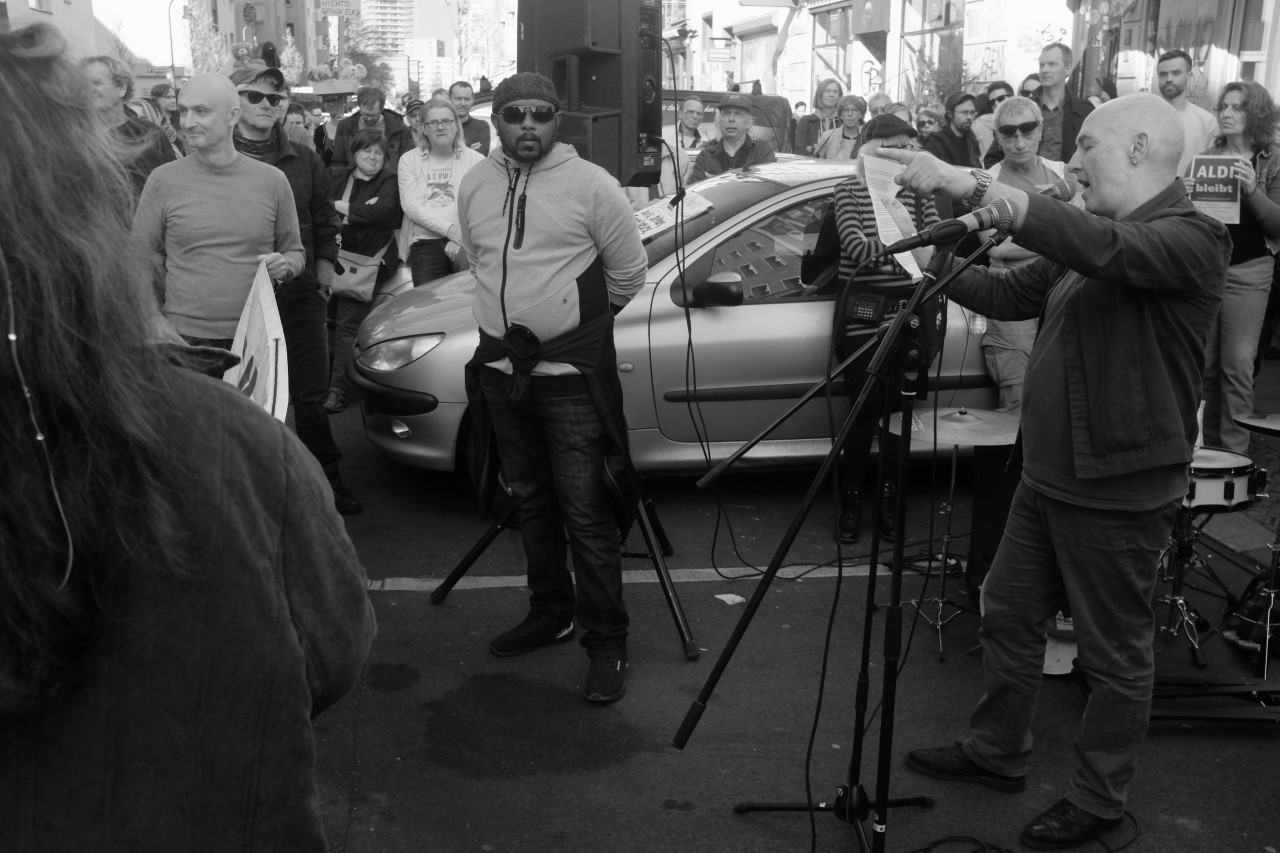 A couple of weeks ago when I saw the proclamation that Aldi contract would be ended in June, I was angry – both at the high-handed manner in which we locals and Aldi staff were informed and by the clear sign that this would clearly become a financially exclusive zone and no longer a market hall for all. This was, after all, the promise which initially secured the owners a cheaper price than other prospective buyers. Walking one block more to Lidl is not an option for my neighbor, nor can she sit there under a roof and watch the passers-by. And neither can I nor any of the locals.

I’ve lived in four cities in my life – Middlesbrough, Newcastle, London and Berlin – and never known such a thriving organically created community as here in Kreuzberg, in this Kiez. I know and chat with all of the shopkeepers and quite a few of the locals on this street. This is rare – like an inner-city village created over decades. And this is what moved me to join with other locals to protect it. It’s nothing to do with “Aldi versus organic” – it’s about preserving something special.

It’s about diversity, inclusion, transparency in dealings and justice.

Dear Messrs. Maier, Niedermeier and Driessen – with the help of a residents initiative you acquired this market hall at a knockdown price on account of your proposal to reinvigorate it and exclude NO-ONE. Sadly, even with huge injections of public funds, the opposite is happening. The stalls are closed on three weekdays, meaning the only visitors are locals shopping at Aldi. I see NO plans on your part to replace the discounter with affordable daily provisions. What I do see in your press appearances is a demonization of those of us forced by financial circumstances to shop at discounters as supporters of world poverty. I see the minutes of so-called round table discussions in which you agree to a possibility of Aldi remaining altered hours later to contain no reference to Aldi – as I suspected, this was no round table – it was a lobbying exercise. I see the flyers I put on my door advertising this rally torn down daily and nightly – go and have a look if you like. I hear about plans of a gegen-demo in which you’ll drive a tractor around our rally. Basically, the neighborhood was “promised” something different than what can now be observed as the actual direction and usage of the Markthalle.

You always seemed like three friendly guys with a good concept to offer and a hell of a lot of energy. But something has changed. There is no longer a willingness on your part to engage in any meaningful dialogue with those of us who want to retain the diverse community here. But this isn’t Prenzlauer Berg or Hamburg. It’s Kreuzberg. And Kreuzbergers – and Wahl-Kreuzbergers like me – don’t respond well to being told what is good for us. And until we are offered a suitable alternative, Aldi stays.

One thought on “The “Markthalle 9” – It’s about diversity, inclusion, transparency in dealings and justice – Aldi stays”