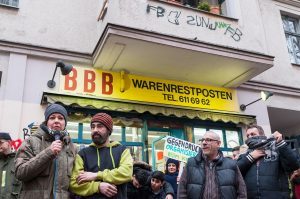 Plan B for BBB

At the centre of the Wrangelkiez neighbourhood – aka Bizim Kiez – stands Bantelmann Betriebe Berlin (aka BBB) – by the skin of its teeth. The homeware and household goods store is the latest success story of the local neighbourhood anti-gentrification and displacement initiative. But are the family running the shop also the latest victims?

It is, once again, foreign investors who have got their hands on the building at number 86 Wrangelstrasse, the historic local shopping street that lends the neighbourhood its name. More poignantly still, BBB is located only a stone’s throw down from Bizim Bakkal, the now defunct local greengrocer’s from which the well-known local solidarity movement took its name and inspiration only two summers ago. This is exactly where BBB has been situated ever since the days when the Wall was still penning everyone in. At Christmas the newly celebrating owners of the building, a typical Berlin residential block with business units at street level, suddenly ordered the family out at less than four months’ notice, without a second thought for the livelihood and future of husband, wife and three pre-school children.

Were it not for the support of their neighbours and local community channeled through the Bizim Kiez initiative, the SIAG / S Immo property company would have forced them out of work and into a life on state benefits.

Shortly after the company served notice on the family the local neighbourhood, under the mantle of Bizim Kiez, got organised – and they, too, meant business. From mid-February they gathered weekly on Wrangelstrasse, the focal point of the neighbourhood, to demonstrate against the eviction. Two months later they registered a measure of success – instead of eviction the shopkeepers were now offered a new three-year tenancy agreement.

Yet this came at a price; they were obliged to give up one of the two retail units making up their store. This means the space availiable to them to display and sell their goods has been reduced by approximately half – and so, as the children get bigger over the next three years, the family’s livelihood is set to decline.

BBB homeware understands its customers perfectly, having evolved over decades at the epicentre of the neighbourhood. This shop was already serving the local community long before the Park Center shopping mall ever loomed hulkingly over the dual carriageway, further down the main road at Treptower Park. BBB has always been there, all things to all people. Available, accessible and affordable to all.

Bizim Kiez’s direct action has helped the family to retain a measure of their livelihood, but there has been a sting in the tail – they have secured only a temporary, three-year renewal of the contract, lost half their shop, and had to accept what is effectively a 74% rent increase. Much as it is a worthy success for the community pressure group, the case also remains a good example of the relative lack of protection in law for small businesses – and therefore livelihoods – against the growing climate of displacement in many districts of Berlin.