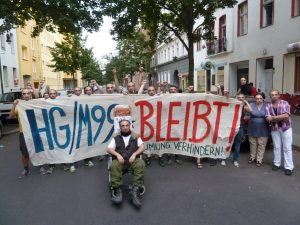 H.G.’s future secured from May 2017 – but he’s still facing eviction and homelessness

Berlin winters can be cruel

Collective efforts have managed to achieve the seemingly impossible in finding alternative new premises for Hans Georg Lindenau, proprietor of M99, the “general store for revolutionary supplies”, from the end of May 2017.

His present landlord was insisting on his eviction on 22 September 2016; however
his doctors urgently advised against this on the grounds that this would place him under unsustainable psychological stress.

In September Bizim Kiez appealed to the magistrates’ court for a temporary stay of eviction to allow H.G. to remain in his accommodation and business premises at 99 Manteuffelstrasse for the remaining months until he can move into his new premises at 46 Falckensteinstrasse, thereby allowing him to see the winter through safely. This was refused.

Numerous elected local politicians, including all three Kreuzberg MPs, signed an open letter to the landlords urging them to allow H.G. to stay in 99 Manteuffelstrasse until May 2017, when he can move to his new premises.

Then in a dramatic surprise last-minute development the district court quashed the magistrates’ court’s order for eviction on the 22nd of September to allow time for a medical assessment of H.G.’s ability to withstand eviction.